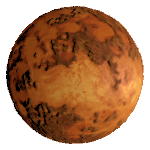 Striker: The innermost, the smallest, the fastest...

Striker holds a few records - it is the closest to PE31 star, the tiniest, and the fastest planet across the whole system in terms of rotation around its' axis. These conditions cause very high temperatures on the surface as well as underneath it. Lakes of metallic, orange-glowing lava radiate out the planet's heat deposits, pretty much stripping the Striker off from having the dark side.

It is believed that the Striker collided with a planetismal or similar celesial at some point of PE31 creation. This collision, apart from heating up the planet even more, ripped out enough of Striker's material for the moon Flamix to be formed.

Harsh conditions is the understatement when speaking of Striker. Still... A fly-by or two is a must for every self-respecting space explorer. 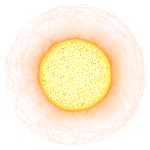